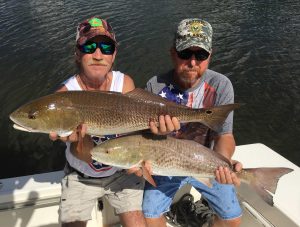 As we reach mid-October the water temperature begins to drop and soon most flats should be in the upper to mid-70’s. That’s when redfish and snook start to become more active. The redfish bite is outstanding all month. Every charter that I pursued redfish, has had success. Some days, I encounter mostly over-slot fish, but during most trips, slot-sized fish were being caught.

Some local fishing guides have been complaining about the lack of redfish all year. I haven’t seen it! The whining started in early spring, way before any inkling of red tide. Without a doubt, some years are better than others, it’s can be cyclical. Back in August, when the water temperature was 90-degrees on the flats, locating schools of fish was difficult at times, I must admit, but that’s because they were staying in deeper water.

I believe, most anglers get into a rut, especially fishing guides. They go to the same fishing spots every day and expect the same results. I have a client that now fishes with me, who said he fished with a guide that literally sat in one location the entire four-hour charter while repeatedly saying, the redfish will show up, but they never did.

Not me, brother! When I roll up on a spot, I start live-bait chumming before I even bait a hook. I want to see if there are fish present and willing to eat. Once a see a few fish hit a bait, I’ll bait hooks. Then after 15 to 20 minutes if nothing much is happening, I’m moving on. Redfish are always on the move. If they didn’t have fins and tails, I’d know where they were every second.

The snook fishing has began to pick up also and will accelerate as water temperatures drop even more. Just as with redfish, when I locate a school snook I live-bait chum the entire time I’m fishing, to keep the action going for hours on end.

With the presence of red tide all long the Pinellas coast, it’s hard to say what our fall migration king mackerel run will be like this year. Typically, most of the winning tournament fish are caught within a mile from shore. I’ve got a feeling the kings are going to stay well offshore and bypass our area all together. I hope I’m wrong, but there’s no baitfish for them to eat!

Want to join the discussion?
Feel free to contribute!