Back during the winter of 2015, I had four different charter clients who caught and released over 100 snook. The numbers were as follows: 112, 103, 123 and 110. After the first milestone, I established the Afishionado 100 Snook Club. Well, I’m happy to say that Pedro, Gus and Regan, topped the record with 125 on Friday, February 16.

This day started as any other. I woke at 4am to launch my boat before daybreak to go catch bait. At 10am, I picked up my New York client and his two 13-year-old twin boys and headed to my first snook spot. After four hours they landed 86 snook in that one location. As the action slowed, I suggested we move to another area, so they could “join the club.”

Once there, hungry snook surrounded the boat and the action continued. After they caught their 100th snook, I said, “let’s top 122.” The boys were all for it, even though their dad was ready to call it quits. Luckily, it took less than an hour to reach the 125 mark, then I pulled anchor so I could be back at port by 4pm.

This kind of action doesn’t happen every day, but when it does, there’s cause for celebration. 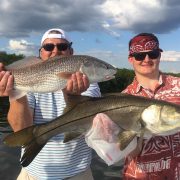 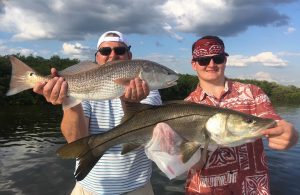 Technically, the Spring Equinox doesn’t occur until March 20, but for us here in Tampa, it basically starts at the beginning of February. By now, the flow of extreme cold fronts from the northern regions of the country have waned and our daytime temperatures consistently stay in the mid-70’s to 80 degrees.

As the month progresses, the water temperature continues to raise, and propels the fish to go on a major feed. Top on the list: snook. The snook fishing will be outstanding this month.

Other prime Tampa Bay inshore fishing targets are redfish and sea-trout. Redfish prefer to feed around oyster beds during a high tide. Sea trout, on the other hand, like to lie in wait on deep grass flats for bait to pass by with the moving tide.